Tshwane, 8 June 2022 – SARS and the Department of Trade Industry and Competition (DTIC) have joined forces to donate tonnes of seized clothing, blankets and footwear to flood victims in KwaZulu-Natal (KZN), Eastern Cape, North West, and the Free State provinces.

The initiative, named Project Sizani (We all Help), took shape after the declaration of a state of disaster by Pres. Cyril Ramaphosa in response to the recent heavy rains and flooding in the Eastern Cape, North West, Free State and Kwa-Zulu Natal provinces.

SARS conceived of the idea of making seized clothing, blankets and footwear available, which are strictly regulated by the Customs Act, Act 91 of 1964, administered by SARS, and the Counterfeit Goods Act, administered by the Dtic, as well as a 2009 and 2020 NEDLAC agreement, stipulating that seized goods must be destroyed so as to avoid disruption to the South African market.

It is important to note that SARS, by itself, is not in a position to conduct an operation of this magnitude from a legislative or operational perspective. A raft of engagements and approvals by various key government and other external stakeholders, as well as their direct involvement, were required to make it happen.

This included a “once-off deviation” from the NEDLAC agreement, as agreed upon during a meeting with key stakeholders in the Clothing Textile Footwear and Leather Industry (CTFL) to enable the donation of specific CTFL goods that have been seized and forfeited to SARS to the victims of the severe weather events of April 2022.

Execution of the operation

The execution of the operation is led by a Governance Task Team (GTT), established for this purpose. This team works in close collaboration with the National Disaster Management Committee to obtain information and direction on matters of common interest, as well as to align the efforts of the donations of the goods with the bigger government led project. The GTT is responsible for overseeing the process flow and to ensure that the donated goods are duly accounted for. The distribution is strictly monitored through the close working relationship at ground level with the Department of Social Development (DSD) and the current shelters that are housing people.

Inputs from the KZN Premier’s Office were used to develop the donations operational plan, which sets out the principles governing the process of donations such as quantities proportionate to the confirmed numbers of the people in need, as well as governance processes to protect the entire donations value chain.

In addition, the provincial department of Cooperative Governance and Traditional Affairs (COGTA), through its disaster management structures, played a leading role in preparations for the donations process, while the involvement of organised labour and the CTFL industry, as key stakeholders, are deemed necessary in every step of the project to monitor the processes and ensure any risks that may harm the local business are mitigated. The South African Association of Ship Operators and Agents (SAASOA) assisted with the transport of the containers to the warehouse in Durban, from where distribution takes place.

Due to the critical need for blankets in eThekwini, the roll-out of a pilot programme for the donations started in KZN last week. During the seven-day pilot approximately 1612 blankets are being donated to specific flood victims at shelters in eThekwini, as identified by the KZN Premier’s Office. In total altogether 35 806 seized blankets/duvets are earmarked for distribution across the affected disaster areas in the country.

The process of engagement with Eastern Cape and North West have started and is intended to be a replica of the KZN operations.

SARS Commissioner Mr Edward Kieswetter thanked all Government Departments that have collaborated to deliver such a sizeable contribution to assist the victims of floods. He said, “We hope and trust that this gesture of goodwill will go a long in mitigating suffering that was brought about by this natural calamity. The blankets, especially now during winter, will a make difference to all”. 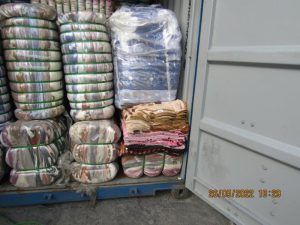