Pretoria, 6 March 2015 – The South African Revenue Service (SARS) is providing an update to the media and the public on its operations to combat crimes such as smuggling, fraud and abuse of the tax system for the month of February 2015.

The aim is to inform the public about the work SARS’ Customs and Enforcement teams do on a daily basis, to provide an indication of the prevalence of tax and customs-related offences in South Africa, and to illustrate the support SARS provides to other law enforcement agencies.

PLEASE NOTE – on 4 December 2012 SARS issued the Customs and Enforcement Operations report for November 2012. It noted that a SARS employee had been arrested on fraud charges. As a follow-up to that, SARS would like to clarify that the National Prosecuting Authority withdrew all criminal charges against that employee, Ms Sindiswa Jama on 17 July 2013.

Interventions to combat Fraud and Corruption
SARS will combat any form of corruption, fraud and abuse of the tax system. The following cases can be reported for February 2015:

1. On 3 February Mr Cosmo Romanelli pleaded guilty in the Krugersdorp Regional Court to 7 counts of non-filing of tax returns, and was fined R14 000. He had initially appeared in court on 5 December 2014.

2. On 5 February, Forum SA Trading 325 (PTY) LTD (represented by Mr Christiaan Jonker) pleaded guilty in the Mankweng Magistrates Court to 18 charges of submitting VAT returns without payment. The prejudice to SARS was over R1.6 million. It was sentenced to a fine of R40 000 for each count which is wholly suspended for five years, provided no further offences are committed. Further, the accused must pay R1 177 998 to SARS in instalments of R30 000 per month starting on 6 February 2015, with the last payment to be made on 7 February 2018.

3. On 11 February, Premier Attraction 1014 CC and Gold Liberation CC (with Ms Veronica Shubach being the sole member) appeared in the Nigel Magistrates Court on 2 charges of non-filing and non-payment of tax returns, and pleaded guilty. A fine of R14 000 was handed down.

Customs Interventions
In the period from 1 to 28 February 2015, SARS Customs and Enforcement teams have:

a. As previously reported, the SARS Customs team at OR Tambo International identified a male passenger for further checks while he was disembarking from a flight originating in Cotonou, Benin. He had checked in 3 pieces of luggage – bags each holding a large plastic “jerry can”. These cans were found to contain small packets of liquid ecstasy totalling 30 litres – with a value of R9 million

b. 5.1kg ephedrine, valued at R1.5 million, found when SARS Detector Dog Archie reacted to a parcel at the OR Tambo International Airport Mail Centre, which had arrived from Mumbai – in a box containing vehicle spare parts. 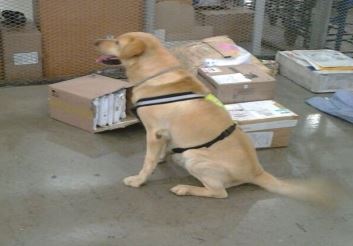 2. Seized a number of other items coming into the country, including

a. 99 Master Cases and 38 632 cartons (over 8.7 million individual cigarettes) of illicit cigarettes, valued at over R6.7 million.

d. 60 detonator cables (valued at R3975) and 30 tubes explosive gel (valued at over R80 000), found in an abandoned bag in the bus parking area at the Beit Bridge border post.

e. A Pietro Beretta Z88 9mm pistol and one magazine containing 13 rounds of ammunition – all apparently SAPS issued – found on a driver attempting to enter South Africa at the Lebombo border post with Mozambique. The driver and the weapon were handed over to the SAPS for investigations.

g. 17 suspected stolen cellphones, in two parcels – one bound for Tanzania and one for China. In both cases the parcels were identified by SARS Detector Dog Willis – who is trained specifically to identify specific components used in the manufacture of cellular phones.

3. Prevented a number of items from leaving the country, including: