PRETORIA, Friday 26 April 2019 – Today the South African Revenue Service (SARS) and Office of Tax Ombud (OTO) signed a historic agreement to forge an effective working relationship that will deliver excellent service to the taxpayer.
This will effectively create a single platform for the two institutions to engage each other on matters of mutual interest without conflicting their respective mandates, particularly on corporate and operational issues.
The areas of agreement emphasize collaborating in a professional manner to uphold the independence and autonomy of each institution.
Importantly, this must be consistent with the principles enunciated in the Tax Administration Act.
This marks an important breakthrough for both institutions to commit to a relationship based on consultation, mutual support and co-operation when it comes to disclosing information, training, secondment of staff and general mutual co-operation and assistance.
Tax Ombud Judge Bernard Ngoepe welcomed the signing of the MoU describing it as a step in the right direction. He added that he hoped it would bring an end to the undue delays in the finalisation of taxpayers’ complaints. “The signed MoU does not mean we will not diligently deal with taxpayers complaints against SARS. We remain an independent institution and will continue to execute our mandate fairly and impartially. We are committed to maintaining a balance between SARS’s powers and duties, on the one hand, and taxpayers’ rights and obligations, on the other,” said Judge Ngoepe. The Judge further stated that he was “confident that it (MoU) will benefit taxpayers and strengthen both institutions in the execution of their respective mandates.”
In the unlikely event that there are specific issues that are not addressed within the agreement, separate service level agreements may be negotiated when necessary.
However, if an agreement cannot be reached, then the parties will consult the Minister of Finance, whose decision on the matter will be final.
SARS accepts that the Tax Ombud’s mandate is to review and address any complaint that concerns a service failure or a procedural or administrative matter arising from the unfair application of a tax Act and the Customs & Excise Act by SARS.
It is noteworthy that the Tax Ombud may only review a request if the requestor has exhausted the available complaints resolution mechanism in SARS, unless there are compelling circumstances for not doing so.
However, the OTO may not review the following:

Furthermore, the proceedings and mandate of the Tax Ombud may be further prescribed by regulations made by the Finance Minister.

SARS believes that an independent and objective review of complaints can improve taxpayer education and SARS’ understanding of taxpayers’ issues. It will provide a view of taxpayers’ issues from a different perspective and interpretation of the law.

Thus SARS Commissioner and the Tax Ombud agreed on collaborating when the OTO requested information on areas of mutual interest, including access to SARS’ officials who will be available to assist the OTO in relation to information systems, human resources, finance and procurement, executive support, and access to SARS’ training facilities. 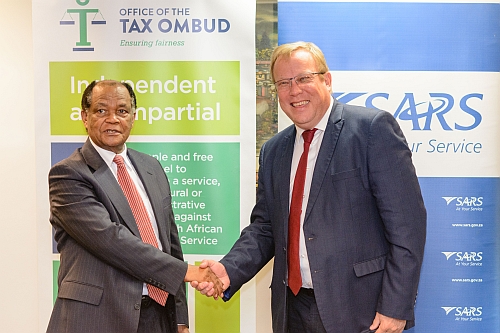